Witness the downfall of a cross-dressing husband, as he's forcibly turned into a shamed sissy slut

January 29, 2020
If you like filthy fiction, then read my latest hardcore tale of sissification and humiliation. 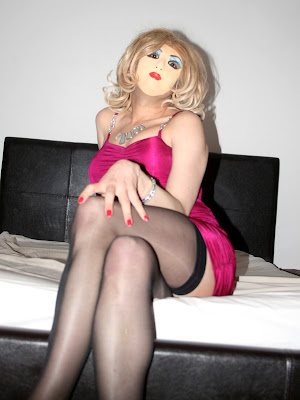 I have always loved putting my filthiest fantasies down on paper for everyone to read. I especially enjoy giving my dominant wife an insight into the wrapped perversions in my sissy mind, but she might be in for a bit of shock when she reads my latest erotic novella SHAMED SISSY SLUT. It tells the tale of a man who is forced to act as a lingerie model at an underwear and sex toy sales party being thrown by his wife, and as well as having to go through the humiliation of parading around in lingerie in front of a baying pack of women, he also faces the utter shame of dealing with the husbands who come to pick them up! 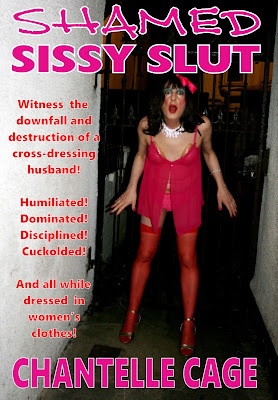 The new novel combines lots of my favourite kinks and fetishes, including forced (but not entirely unwilling) feminisation, small cock humiliation, bondage, discipline, female-led-relationships, public exposure and cuckoldry. I got very turned on while writing some of the scenes and I hope that comes out in the writing. (Although I should point out that my wife insisted on me wearing my chastity cage before I sat down to write each day, so I wasn't allowed to climax even once throughout the writing process). And I also should point out that I wrote the whole novel while dressed in women's lingerie, because feeling silk and satin really helped me get in touch with the novel's central character - a man who has his sense of manhood brutally destroyed in one truly extreme night of sissification.

I know I am very lucky to be married to a lady who is so keen to take part in the destruction of my manhood. She not only regularly forces me to dress in public, but has also openly ruined me in front of many of her friends. And I hope this novel captures some of what it felt like the first times I was forced to show the sissy me to her female friends. Because I will never forget the shame I felt, but also how excited I was to be paraded around in panties - and to become a fully shamed sissy slut.

Read the full story of one man's transformation from married man to sissy whore in SHAMED SISSY SLUT by Chantelle Cage - available now at A1AdultEBooks.

Popular posts from this blog

March 07, 2019
Why I'm so often forced to go over Mistress Chloe's knee for a lesson I'll never forget!

Spanking and corporal punishment has been a feature of my marriage ever since my wife first discovered that I liked dressing up in female clothes. She regularly pulls me over her knee and pulls down my knickers for a bare bottom thrashing, or sometimes she'll turn my buttocks red with the aid of a paddle or riding crop. She is very forceful when she has to be and always aims to stretch my rather girlie limits, regardless of how much I whine and scream during punishment. She's a proper no-nonsense lady like that; and I'm often left too sore to sit down after one of her agonising discipline sessions!

There are lots of reasons why Chloe chooses to treat me to a thrashing. Normally I'm getting spanked for having stolen a pair of her knickers or a pair of her stockings, but sometimes it's just as a punishment for having suc…
Post a comment
Read more

June 28, 2017
With a dick as limp and tiny as mine, was it inevitable my wife would transform me into a girl?

I have a tiny penis - there are no two ways about it. It's not even three-inches long in its flaccid state and it barely grows on the rare occasions it gets hard. I have always been ashamed of it, and it's always made me feel like a total failure of a man, which might well be one of the main reasons why I've always liked the idea of wearing women's clothing. After all, when you have a dick that's the size of a clitoris, then it's always going to look much better in a pair of skimpy, see-through panties than it's ever going to look trying (and failing) to create a manly bulge in a pair of boxer shorts.

My wife actually laughed the first time she saw my tiny manhood. It was a freezing cold night, so it had shriveled to the point of near invisibility, and she couldn't help but giggle at the sight of a man with so l…
Post a comment
Read more

July 24, 2017
Every limp-dicked sissy deserves to have his shameful secrets exposed in print!

Growing up, I always loved going to sex shops and finding copies of transvestite magazines like Sissy Expose, Transformation and Female Mimics International sitting on the shelves. I always used to be really nervous about buying them, because I was 100% in the closet and very uncomfortable with my desire to cross-dress, but I'd somehow pluck up the courage to take them to the counter, then I'd hurry home and flick through all those glorious pages full of feminised men looking fabulously girlie. I particularly enjoyed the photo shoots that showed transvestite maids serving dominant women, or ones showing trannies having sex with men. These mags had a massive influence on me, but I always felt ashamed when I bought them and was terrified my parents or my sister might find them in my secret stash one day. So I kept them well-hidden for fear of being exposed as a sissyby thes…
Post a comment
Read more

Chantelle Cage
I am a sissy transvestite who is currently undergoing a full male-to-female transformation with the help and assistance of my dominant wife Chloe.